Any donation amount is greatly appreciated

The Hirsche Smiles Foundation (HSF) was started in 1996 by Dr. Blayne Hirsche and Dr. Michael Chandler. 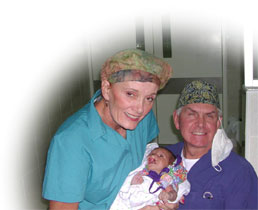 Dr. Hirsche, a plastic and reconstructive surgeon and Dr. Chandler, an anesthesiologist, had visited Guatemala and felt the need to provide medical/surgical help to the children
suffering from birth defects such as cleft lips and cleft palates. The first few missionswere involved with taking a small team of doctors and nurses and providing services in a state-run hospital in Chiquimula. Over the next few years, additional nurses and physicians were involved and contacts were developed within the country of Guatemala, as well as in Cuauhtemoc, Chihuahua, Mexico. From 1999 until 2010, missions were taken to Guatemala early in the year and Mexico in the Fall. Since 2010, surgical missions have only been to Guatemala.

Dr. Hirsche and his wife, Sandra, were killed in a small plane crash in November, 2002. After their
deaths, several members of the surgical team led by Dr. Alan Patterson, met together and made the
decision to continue the work that Dr. Hirsche had started by continuing missions to Guatemala and
Mexico. With the permission of the Hirsche children, the Hirsche name was kept to honor Dr. Hirsche’s
vision in starting this work. Dr. Charles Stewart and Dr. Steven Warnock became part of the team and
helped to provide the surgical expertise needed to continue the plastic surgery missions. As the years
progressed, other plastic surgeons such as Dr. Faizi Siddiqi and Dr. Jed Bindrup joined the teams to
provide their surgical expertise. Other surgeons, anesthesiologists, pediatricians, dentists, nurses and
other volunteers have supported the missions, providing safe, up to date surgical care to each child,
adhering to the same standards as would be found in US hospitals.

Since 2000, HSF has sponsored multiple dental teams who have gone to many remote areas in
Guatemala to provide modern dental care to children and adults. These teams use modern portable
dental equipment and include such services as restorations, crowns, sealants, and extractions, as well as
education on dental hygiene. The dental teams also include humanitarian volunteers that help the
people in remote villages with building projects, educational supplies, blankets, and clothing.

Beginning in 2010, HSF has sponsored Will Jones and his group of home builders, who go to Guatemala
and construct simple, basic comfortable houses for the very poor. These small, well-built houses give
not only physical security, but are a focus of pride for the people that are thus assisted, allowing them to
focus their energies on improving their education and jobs. Dozens of families have been helped by the
Hirsche Homes teams.