Want to make a donation now?

Your generous gift will literally change the life of a child in need. A donation of $250 will pay for the cost of one surgery. 100% of your donation goes towards expenses for the hospital and supplies. Our doctors and staff donate their time and pay for their own travel expenses. 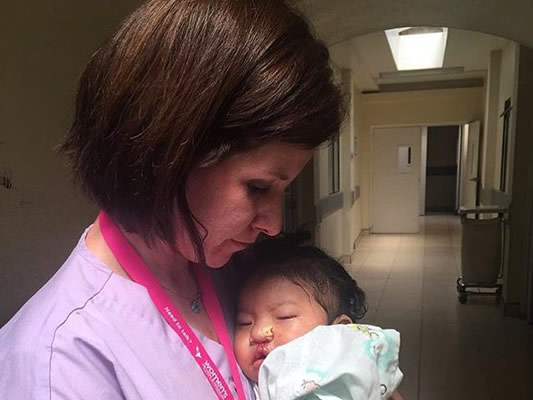 This little boy came to us with a cleft lip which we repaired. This is him and his nurse during the first day post-op. He also has a cleft palate. Hopefully we will see him again next year for this repair that will allow him to eat and speak properly. 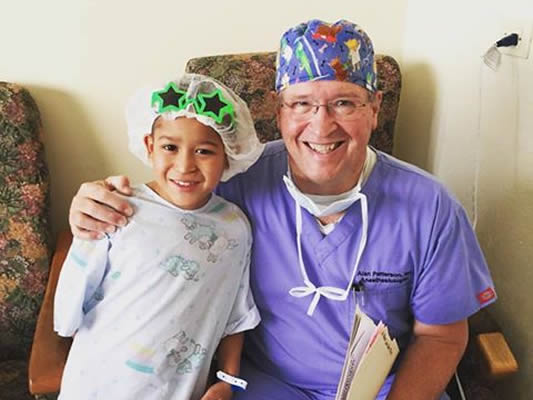 This little boy came to us in 2002 and we repaired his cleft lip. Now you can’t even see the scar. Now he returns for his cleft palate repair. Hopefully he won’t have to return again. We saw this little child for the first time in 2003. We repaired her bilateral cleft lip and urged the mother to bring her back next year for the palate repair. 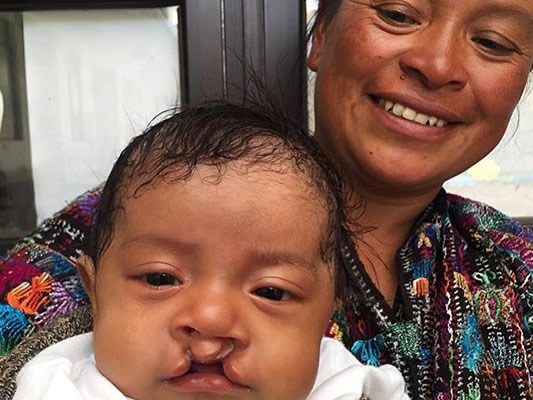 This little girl has a primary cleft lip. The palate is whole. One trip to see us will make her like a normal child. By the way, these children don’t like warm water for their baths. They are used to harsh conditions and few baths in cold water. 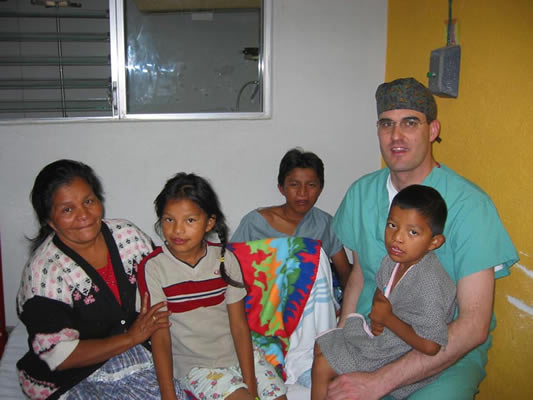 All of the children in this family have had cleft lips and palates. They needed palate revisions to be able to speak better. How could you only help one of these children? Dr. Steven Warnock (Salt Lake City, UT) operated on them all. How grateful the mother was! 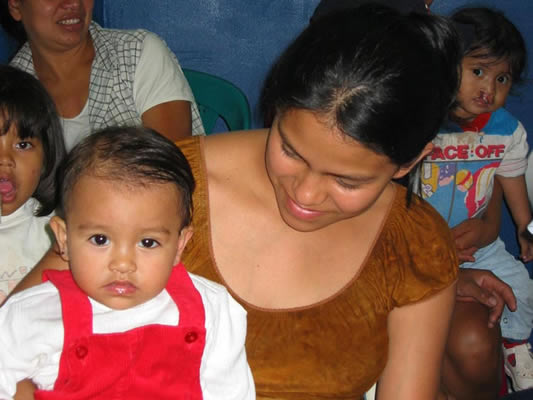 This little girl was born with only rudimentary fingers that were fused during development. We separated the ones we could and gave her a useful hand. Next year, perhaps, if they return, we can do something for her right hand. 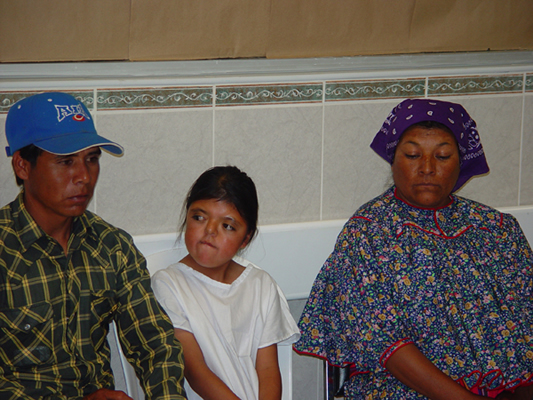 Rosalinda was born with Apert’s Syndrome. She has many deformities including a cleft palate which we repaired. Her fingers and toes are fused so that she cannot hold a pencil. The children make fun of her at school. We separated her fingers and did skin grafts. Now Rosalinda says kids will like her better at school because she can do what they can. 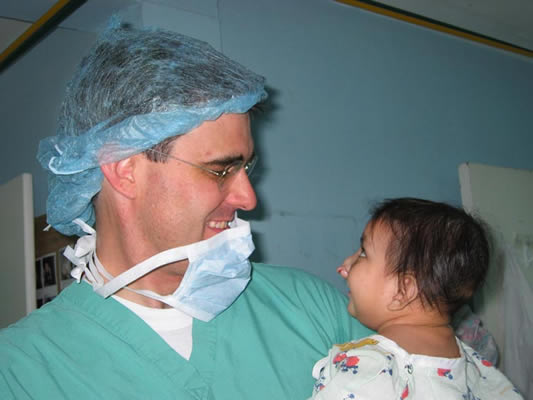 Who could resist a smile on a crooked face? Dr. Warnock repaired this child’s very serious cleft lip deformity. Hopefully we’ll see her next year for the palate repair. 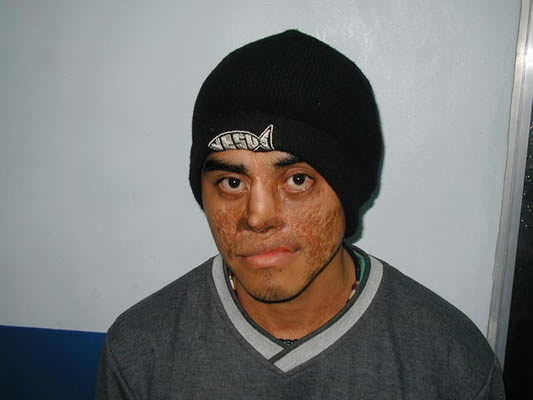 We first saw Isaias in 2001. He had been bitten by an insect and the skin had become infected. It had eaten away his entire nose. All he had was a large hole in the middle of his face. He would not look up and he kept hidden under a baseball cap. Dr. Hirsche created a small nose and two nostrils. Subsequently Dr. Steven Warnock performed more surgery and now Isaias has a nose. Still more work is needed. But the change in Isaias’ demeanor is remarkable. He smiles. He looks you in the eyes. He is happy and appreciative. 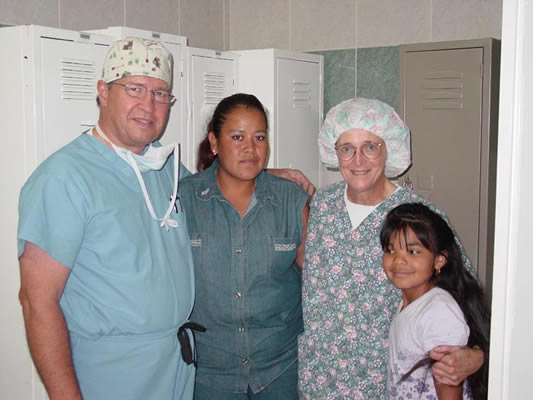 We first met Tania in 2001. She had what is called a bifid nose. We repaired it and she returned the next year for further refinement. In 2003 she came to visit and to thank us for her new nose and her new life. There’s no more teasing at school. No further repair is needed. We hope she has a happy life and comes back to visit each time we are in Mexico. 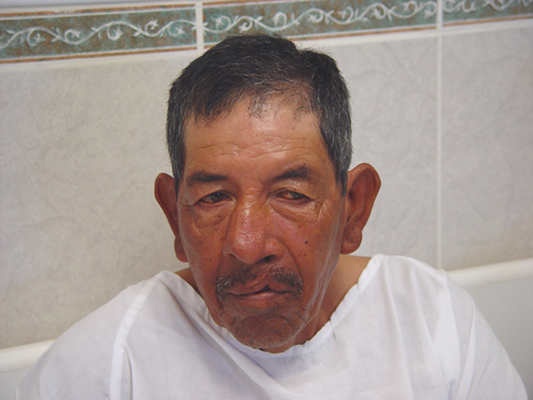 Amador lives in Mexico. He is 57 years old and has never had his cleft palate closed. He cannot speak well enough to be understood. When he ate or drank, food or water came out through his nose.

Well, not any more. Amador came to us and we repaired his cleft palate and also revised his lip. The day after surgery, he could speak better than he had his whole life. 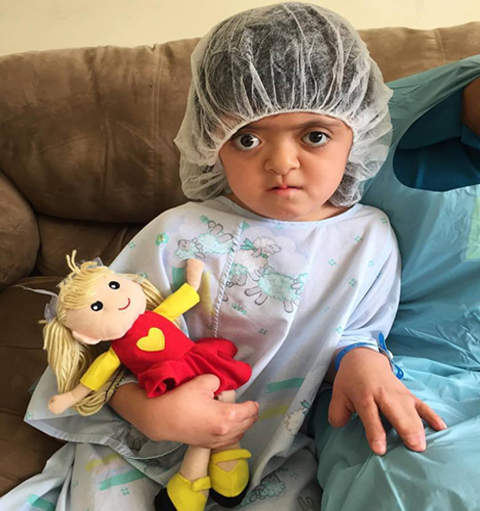 This is Juileta. The doll she is holding was donated by a young girl who lives in Utah. Callie made a big sacrifice donating some of her beloved toys to the children in Guatemala. Julieta held on to her new doll all of the way to the operating room and clutched it tightly as anesthesia was induced. This small toy helped her be brave today. #‎hsfguatemala2016‬#‎bebrave‬ #‎humanitarian‬ #‎plasticsurgery‬ #‎pediatric‬ #‎guatemala‬ 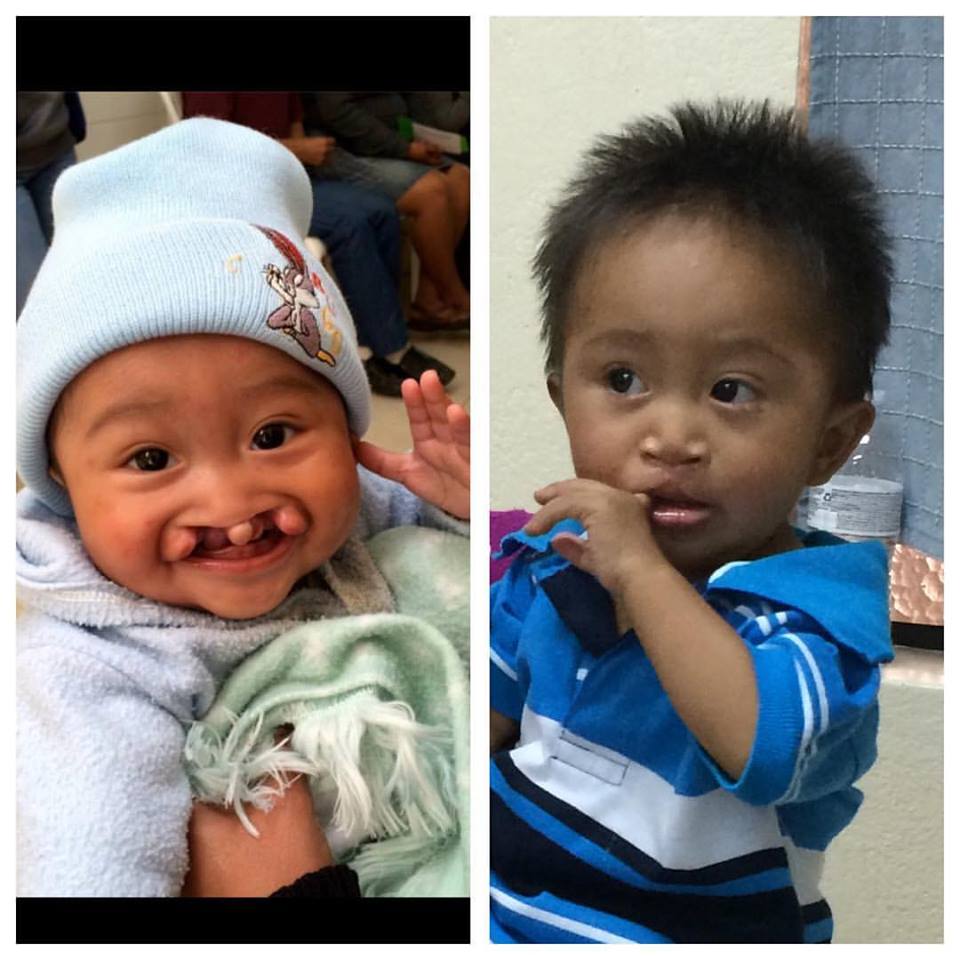 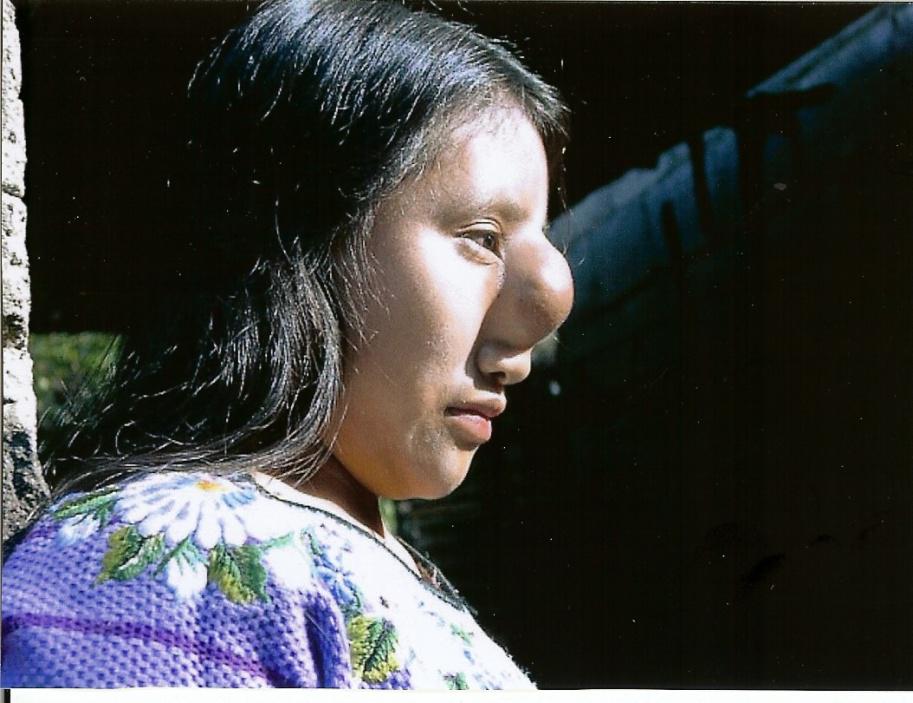 Juana was born with a defect in her skull that caused a huge deformity. She hid in her home for 15 years and didn’t go to school. She couldn’t read or write.

This is Juana when we met her, before her surgery. 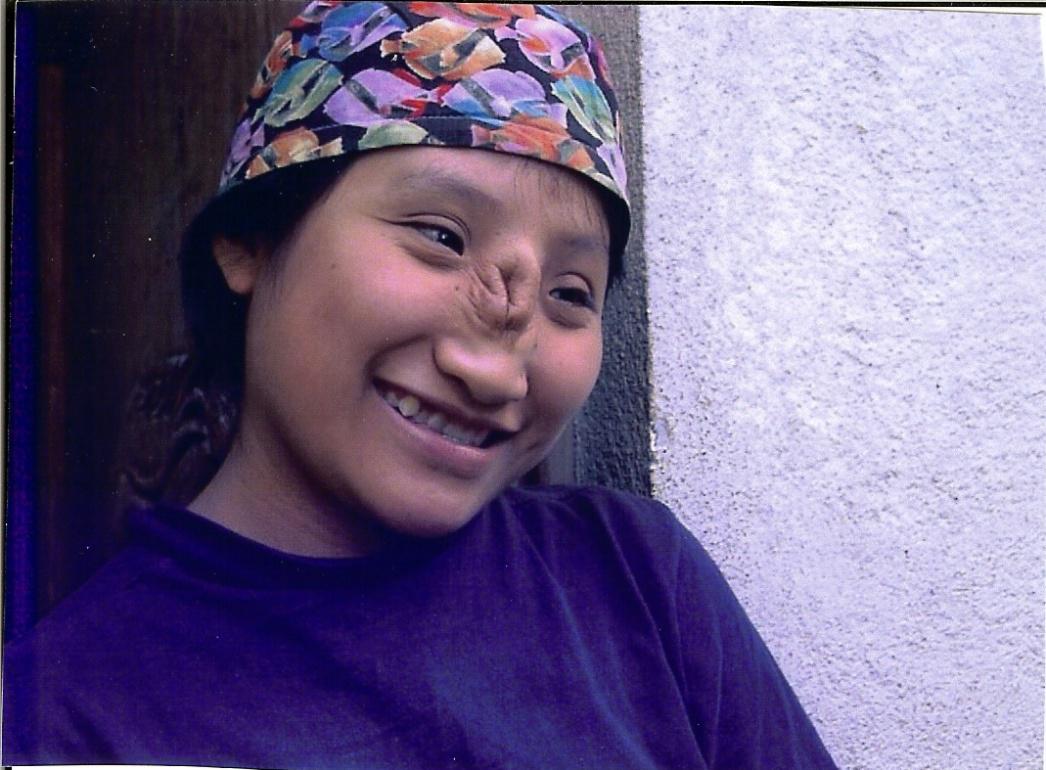 Juana after her first surgery. 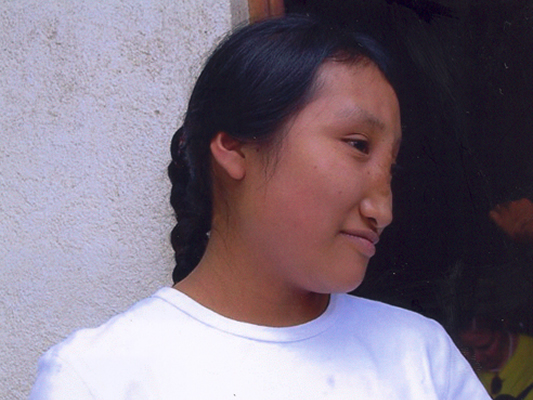 It took three surgeries repaired the defect and gave her a beautiful face and a way to lead a normal life. Now she’s heard the words “No more surgery. You are perfect.”

This is Juana after her third surgery. 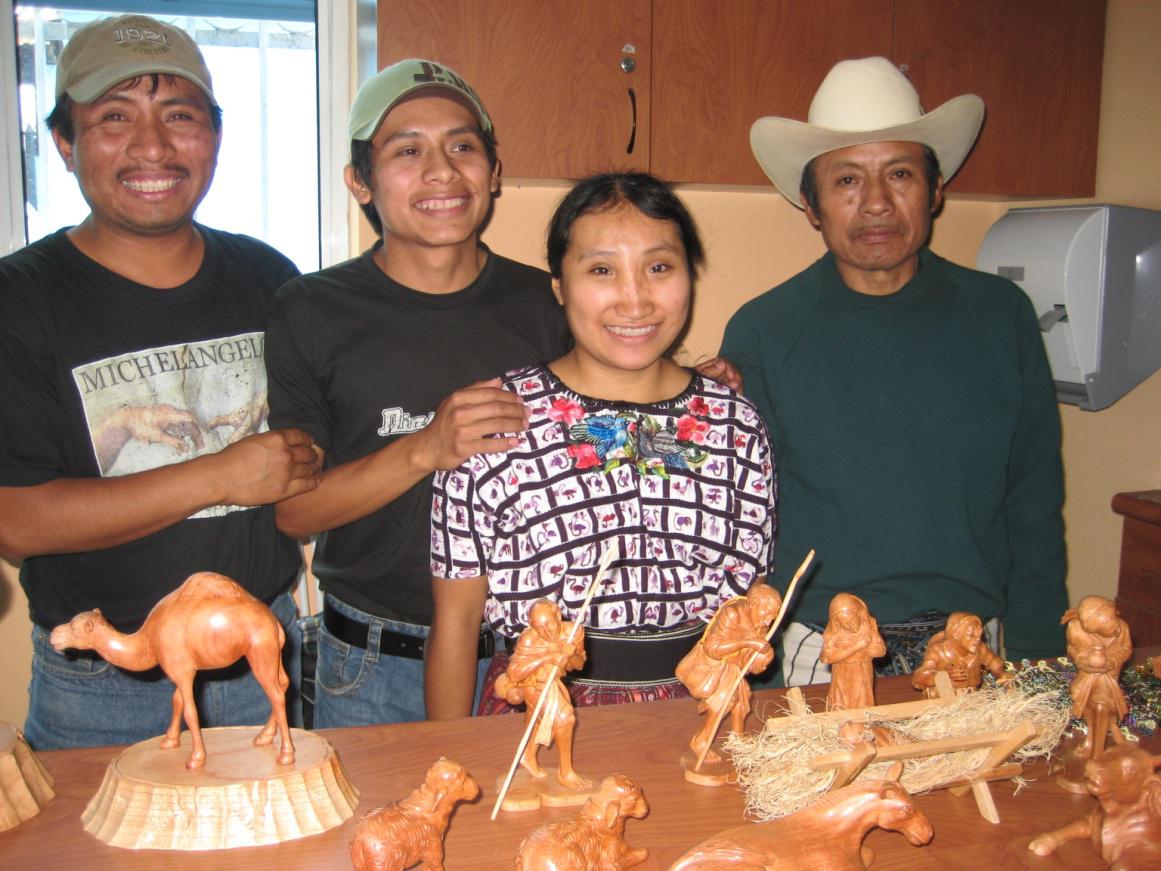 Juana and her family. 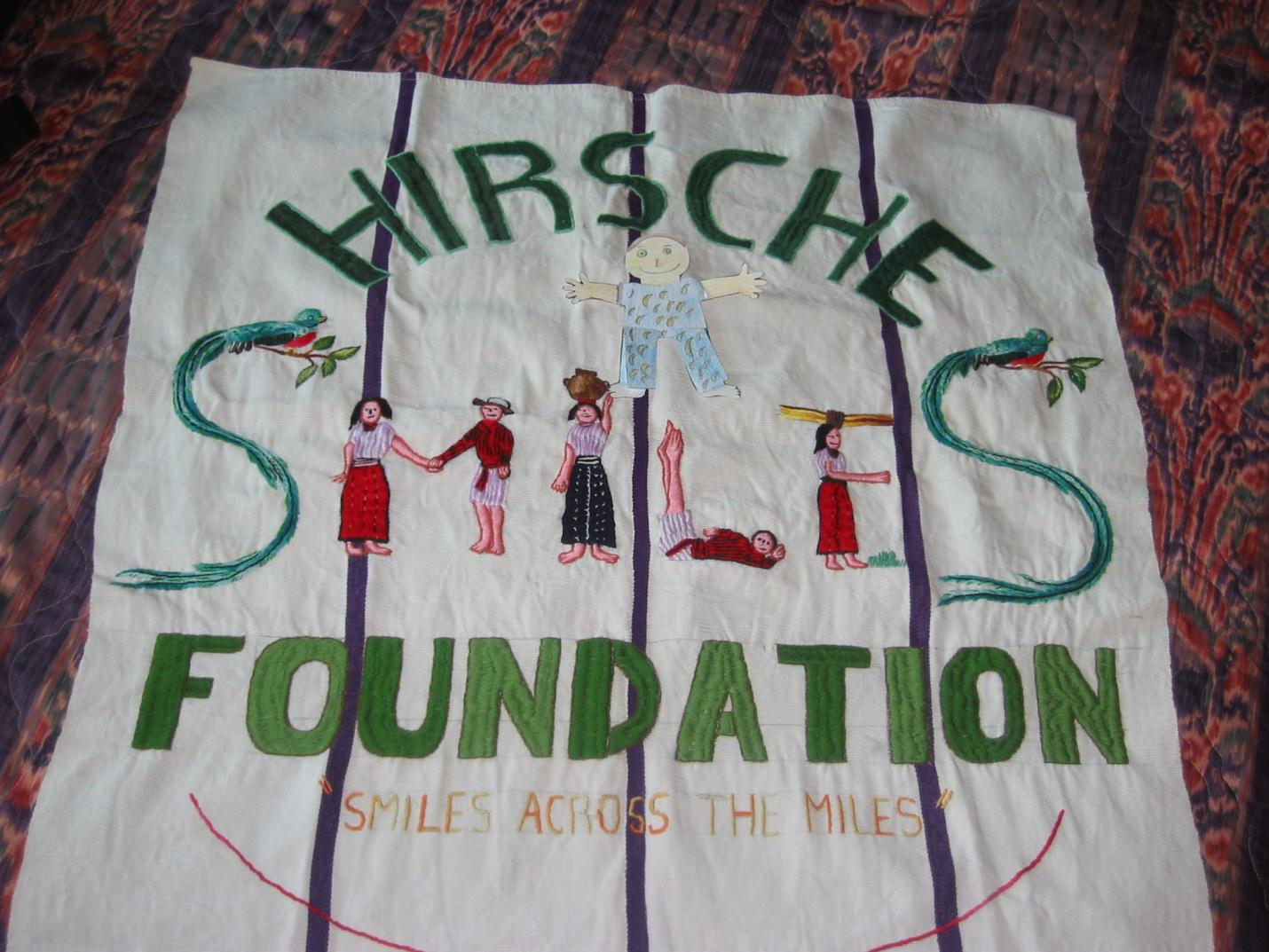 Juana’s aunt made this beautiful banner as a thank you for helping her niece. 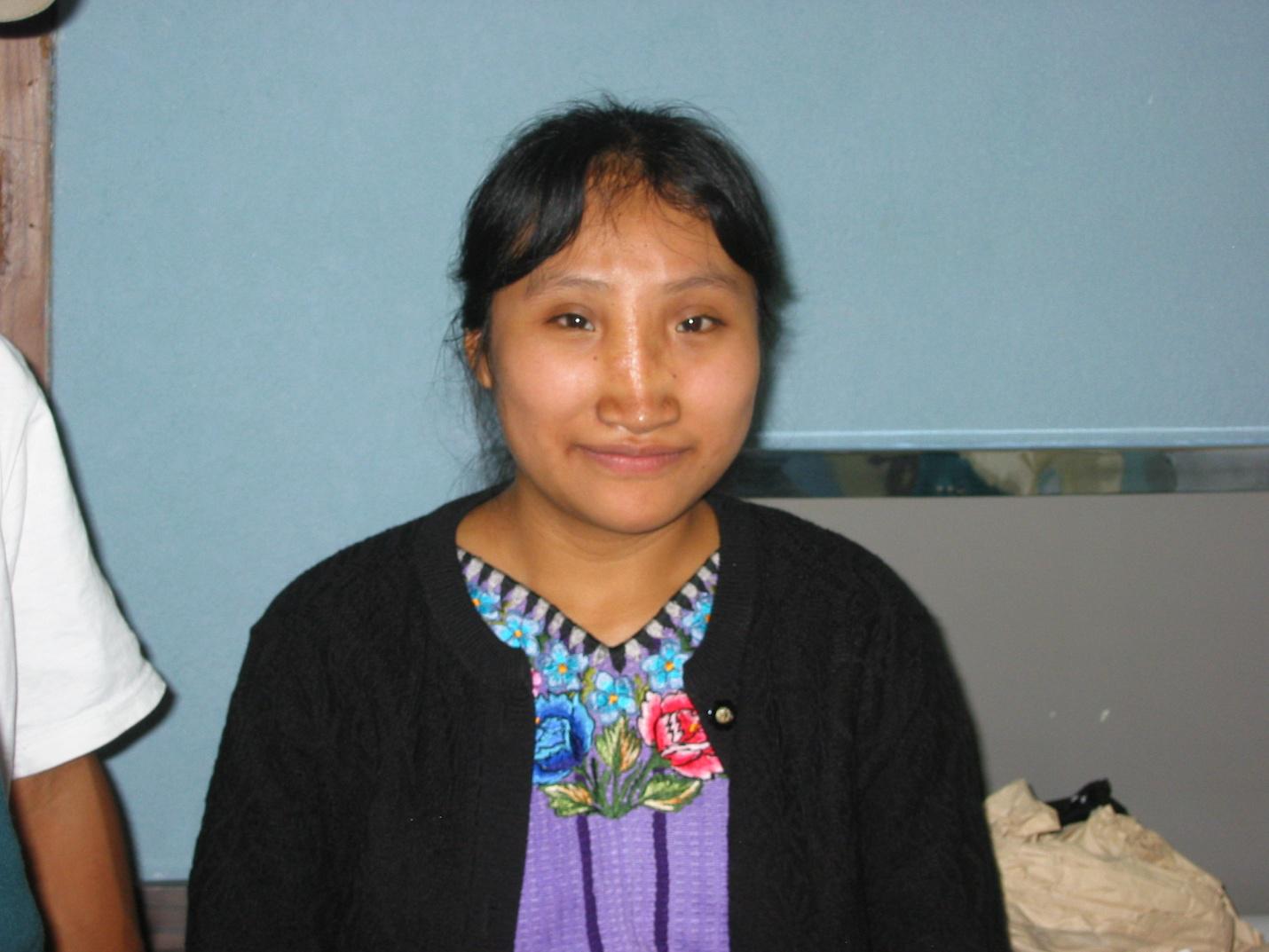 This is Juana after her surgeries after she has healed for about a year or so. 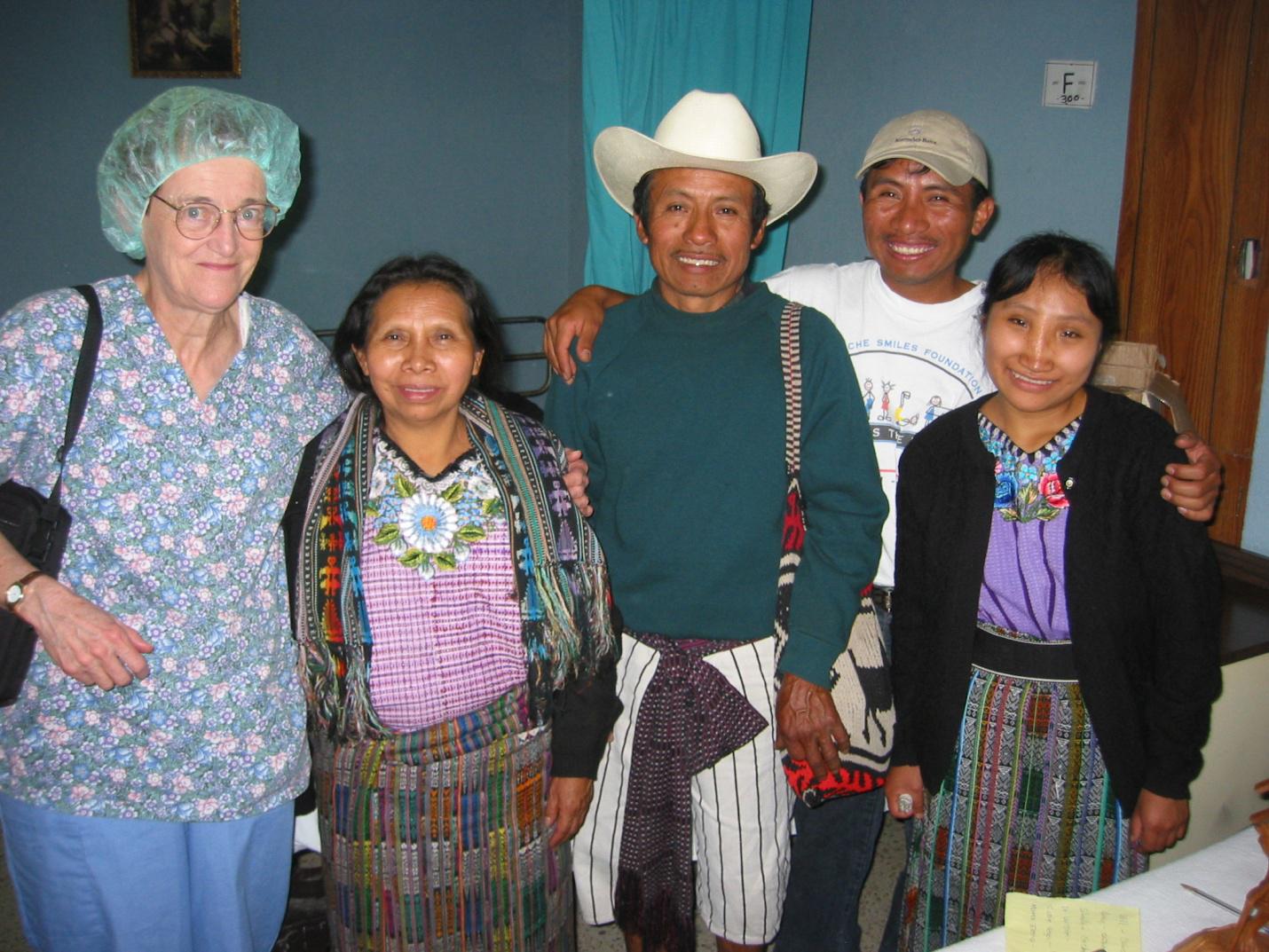 Each year the whole family comes to see us, and they sell their carvings and Juana’s beaded creations. 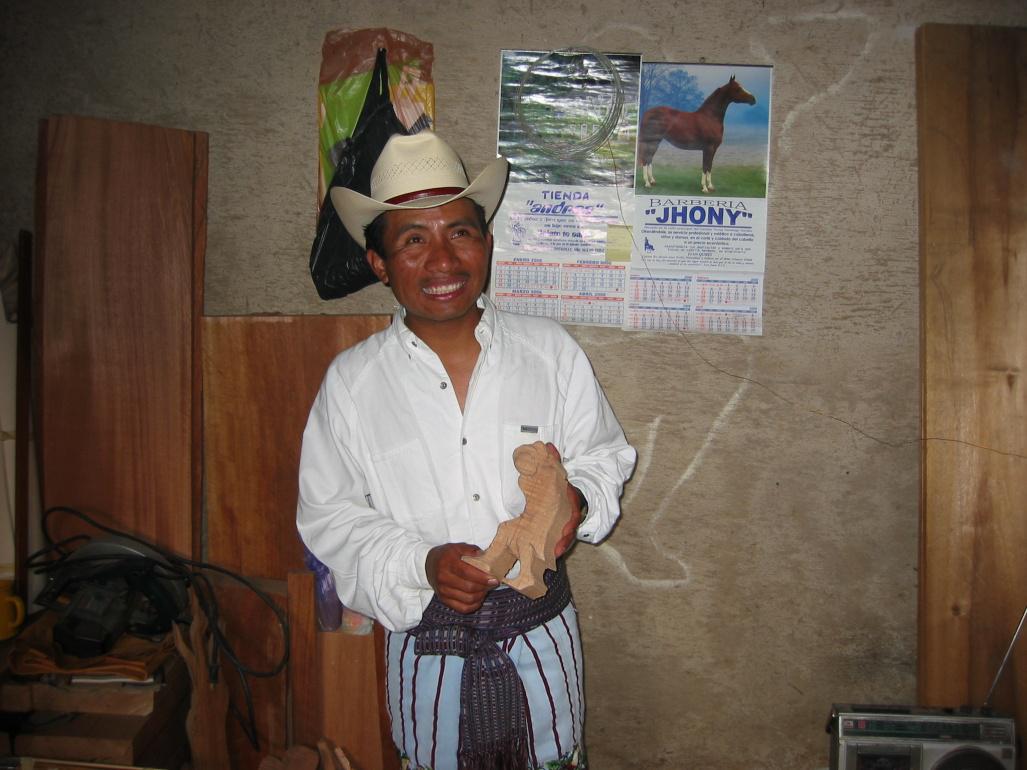 We were able to travel to Santiago Atitlan to visit Juana and her brother Diego.  Diego presented us with a carving for us to sell to earn a donation toward future missions.

Josue
On the day of Josue’s birth, his mother anxiously awaited his arrival. This would be her first child. As the doctor handed her baby boy to her, she was terrified by what she saw. Josue was born with a bilateral cleft lip and palate. Mr. and Mrs. Pop had never seen anything like this. The doctor informed Mrs. Pop that this was her child and that she should kiss him. His mom said, “The first thought that went through my head was, ‘How will my child eat?’’’
She knew that she loved her child, but she wanted to disappear. She was mad at God and blamed him for her first born child’s deformity. She asked him why He would do this to her child and why it had to happen to her.
Josue’s grandmother offered comfort to her daughter by saying that Josue was a creature of God and that only He knew why Josue was sent this way. She continued by saying that Josue needed a mother and that Mrs. Pop could not leave him. If she left, he would wonder later in life why his mother had left him.
Josue’s mom was promised while in the hospital that this type of deformity could be fixed with surgery. She returned to the local hospital to inquire about the surgery, but was turned away because the doctors were on strike. Losing hope, Mrs. Pop decided to speak with a social worker who referred her to the Pediatric Foundation. She was informed that a group by the name of Hirsche Smiles Foundation (HSF) would be coming to Guatemala City and they would be able to fix her child’s facial deformity. In 2007, when Josue was four months old, Dr. Siddiqi, a surgeon with the HSF team performed the surgery that changed the lives of both Josue and his family.
Josue developed a palate fistula that was repaired this year. His mother plans to have him continue with speech therapy to improve his social capabilities. He is a happy little kid with a beautiful smile.

Nadesha Cos Lopez, 15 months
When Mrs. Cos saw Nadesha for the first time her heart broke. She became very sad. Nadesha had been born with a unilateral cleft lip and palate. She went to her mother for comfort. Her mom told her that Nadesha was born that way because she had done something wrong. “You must have not wanted the baby, that is why she was born that way,” or “You probably were drinking when you were pregnant,” she was told. Mrs. Cos felt hopeless to hear her mother speak this way. Mr. Lopez, Mrs. Cos’s husbsand comforted her by saying that God would find a way for their child to be helped. They started by making appointment after appointment with the doctors at the hospital but every time they arrived they were told that the doctor was not available to see them or that he was not there. Then they were referred by Naomi and Hugo, friends of theirs to see if the Pediatric Foundation could help them. In May of 2009, Nadesha was seen in a clinic by the Hirsche Smile Foundation and a few days later she was in surgery having her lip repaired. When she was handed to her mom after surgery, her mom was surprised about the change that had just taken place. “It was as if from one day to the next my child was a different child!” she excitedly expressed. Nadesha just completed her cleft palate repair this year with HSF for which her mother is very grateful. It has changed her life. It has changed her family’s life. Nadesha’s grandmother now understands that this condition was not caused by her mother’s decisions but rather by some unknown cause.